WORLD WAR II PILOT FLEW AGAINST WINDS OF THE TIMES 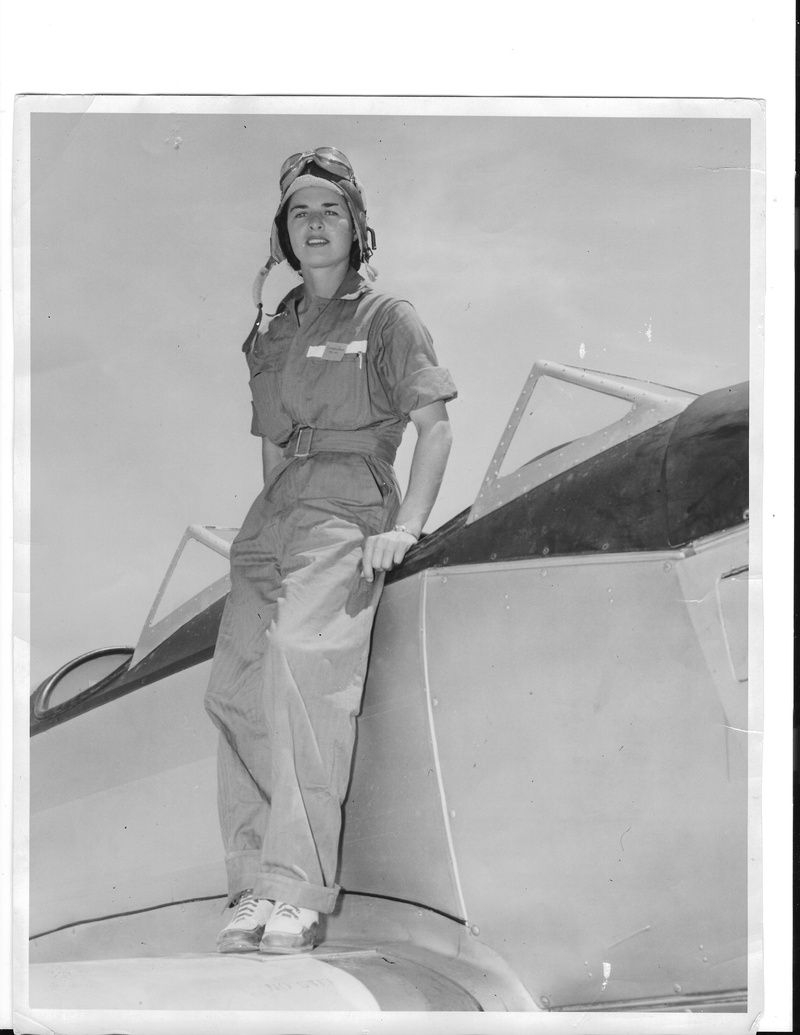 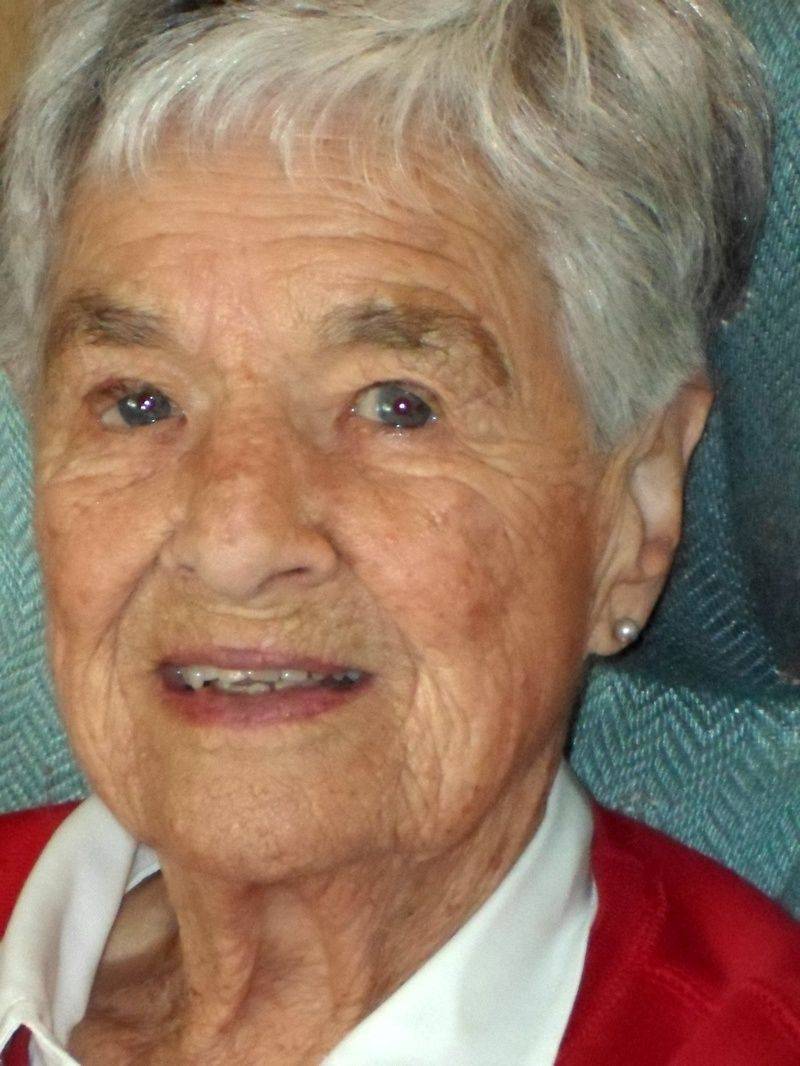 This isn't a fanciful scenario, because it absolutely had to happen.

A mechanic rushes back to the hangar and excitedly tells his buddies: "Hey, you won't believe what just landed in a P-51. And boy, is she cute!"

That was the response of many thousands of American women to the "manpower" needs of World War II. From the storybook riveters, to farmers, to machinists, to pilots, to -

It's known, but not commonly, that select young women would strap on the leather flying cap and goggles and take off at the stick of some of the hottest planes that ever spun a prop.

This is a story of two women. One is 97 years old, lives alone, still drives, gardens and acts 20 years younger.

The other is a plucky young teacher who decides she wants to fly airplanes. She learns how very well, then resumes getting on with her life. But history intervenes, and she ends up behind the windscreen of the plane that admirers say cleared the skies over Europe.

Both women are named Jean Landis.

The two women merge in yellowed photographs and in the memory of the firm-fingered, near-centenarian who digs them out of stored albums.

It's 1942, and Army Air Forces commander "Hap" Arnold is worried about the lack of pilots. There are far more planes than men to fly them. The solution he reluctantly settles upon is one the British are already using - recruiting female pilots to ferry "gentle" training planes from base to base.

In the summer of 1942, the Army began recruiting female fliers. A year later, they became known as WASPs - Women's Airforce Service Pilots, which employed slightly more than 1,000 civilian pilots from mid-1942 until the end of 1944. That service cost 38 women their lives.

Applicants included Jean Landis, who had earned her wings through the pre-war Civilian Pilot Training program. She participated while teaching physical education at Grossmont High School after graduating from San Diego State Teachers College in 1940.

She was accepted into the WASPs in March 1943 at age 25, and after training, started ferrying slow-poke trainers all around the country while across the tarmac sat sleek new fighters fresh off the assembly line. In effect, Jean was driving Fiats while Ferraris waited across the parking lot with keys in the ignition.

Jean now lives in a modest house in the Granite Hills section of El Cajon. Less than a mile away, her childhood home still stands. She was raised on a five-acre farm that was then on the edge of town. The family weathered the Great Depression with a reliance on homegrown vegetables, fryer chickens and goat's milk.

We have developed a stereotype of someone at the edge of 100 years, but it's a mold Jean shatters. She's a small, willowy woman who manages her household like her granddaughter would, if she had one. She complains of occasional memory glitches, but I've heard the same thing from people 30 years younger.

She does, however, have balance problems from time to time, and that results in falls. Jean knows she'll eventually have to give up her house and move into a community, either independent living or otherwise.

This is not a woman who fears reality.

She walks across the room and returns with a small statuette that looks like an Indian warrior in a fetal position. It's heavy, black and ugly, but it's also the prestigious Monty Award, which she received last year as a distinguished alumna of SDSU.

Her current passion is defending the earth we occupy. She is an ardent environmentalist.

"You have no idea how committed I am," she says, especially concerning the dangers of climate change.

There were plenty of pilots, but they were women. Thus, necessity dictated the solution: These were hot planes, but oh well, let's give the "girls" a try.

They selected the top-rated women and sent them to Texas for advanced training to see what they could do. Jean was one of them.

As Jean sits at her table at home, describing the training to become a fighter-plane pilot, she is drawn back into the experience.

The petite, young woman sits in the cockpit blindfolded while the instructor hovers and snaps orders: Where's the altimeter? Where's the gas gauge? Where's the manual brake?

As Jean relives that long-ago moment, she sits on her kitchen chair and touches the imaginary brake, then the altimeter, then the gas gauge.

The women drew to see who would get what plane. Jean drew her wish.

"The P-51 Mustang, my favorite of all. I could hardly wait."

Describe the first time you took off in a P-51.

"You won't believe this one." Jean says her first flight was to practice landings. But when she tried to lower the landing gear ...

"All of a sudden a red light comes on, which indicates your gear is not down and locked, so the procedure for that is to do some dives and jerk it up quickly to see if the force of gravity will snap your gear in place and the light will go out."

The control tower told her to "touch down" to see if the gear was locked, and if not, to pull away.

Let me see if I got this right: Your first time in this plane, and you are supposed to "kiss" the runway to see if the wheels hold?

That's what they wanted, and that's what she did. As it turned out, a switch had malfunctioned, and everything worked out.

Jean spent months piloting P-51s from Long Beach to Newark, N.J., for shipment to the European theater. The instructions were to treat the new planes gently and deliver them intact, a rule that she followed, at least within the spirit of it.

Jean, you mean to tell me that flying all alone over the wheat fields of Kansas, you didn't have the urge to "see what this baby'll do"?

"No one's watching? Oh, yes. Oh, gee, you take a roll like nothing in the world.

"Another thing that I did that was very dangerous and I only did it once, but I shouldn't have, was playing in the clouds. Oh, what an experience - billowing cumulus clouds, just gorgeous, big white things, and then you'd find an opening.

"It was playing in the clouds."

One time, she noticed a hiccup in the engine and decided she needed to put the plane down. She located an airport and radioed: "P-51, number such and such, requesting landing instructions."

The radio was a bit garbled, so she repeated the request. Finally, a man's voice from the tower said, "Lady, get off the radio, we have a P-51 trying to land."

After landing, she found herself at the center of a group of men who had rushed to see the girl flying the Mustang.

You can bet she was the topic at every bar in town that night: "You boys won't believe what Jim here and I seen today down at the airport."

Did you socialize with male pilots?

"Oh, you mean when we're flying together? Oh, yes, we were very friendly. Of course, there's always going to be a little hanky-panky, but it was ignored so long as it was quiet."

I jump the subject and ask, could you fly a private plane right now?

"I wouldn't attempt it, no. My perception, my hearing is not the best, my eyesight isn't the best, and I just feel that I don't belong doing. ..."

She thinks for a moment. "I think I could do it."

Did you and the other women talk about flying combat?

"We all talked about it. All of us said, gosh, they certainly need us. We can fly combat. We offered, but no. At least we opened the way for the women who are flying combat today."

Would you have been eager to do it?

"Oh, absolutely. Gee whiz, we'd give our eye-teeth to fly combat. We were the most discouraged, depressed group of women you ever saw. We knew we were needed, we knew the war was still on, and we wanted to go into combat."

Could you, Jean Landis, have strafed a group of people on the ground for the purpose of killing them?

"I don't know. I don't think until you're pushed to do that you'd really know. I guess, if I gave my - yeah, I guess I would have."

Jean turned her last P-51 delivery to Newark into a patriotic statement: "I flew over to New York and circled the Statue of Liberty several times and wept."

When the military ended the WASP program, the women were thanked and told, "See you later." As civilians, they were not eligible to reclaim their prewar jobs, so Jean turned to college teaching, eventually earning a spot on the San Diego State physical education faculty, retiring in 1979.

The government granted the WASPs full military status and veterans benefits in 1977, and in 1984 awarded the World War II Victory Medal to them. In 2009, each WASP, or her surviving family, was awarded the Congressional Gold Medal.

A few years after leaving the service, Jean married a physician. The good doctor, however, had a "possession" problem. If he had treated his patients as he did Jean, they would have died of suffocation.

It didn't take long for him to learn that Jean submitted to "handling" like a P-47 Thunderbolt. The marriage crashed after three years, and Jean, childless, resumed her independent ways.

Leaving the excitement of the WASPs must have been a let-down.

"Oh, gosh, boring. Going back to teaching school after that? Oh, geez."

And then married to a guy who wanted to own you.

"Yeah, right, but I did stay with the teaching, just not with him. I got into college teaching, no little kids that give you a bad time. The college kids were great. I had a wonderful career."

This is a memorable lady we've been talking to. Jean Landis is the type of woman who terrifies a few men but delights far more with her independence and that toughness that is not the same as hardness. Frontier women must have been a lot like her. I gave her the compliment of saying, "You're one tough cookie."

Jean smiled, nodded and allowed as how that just might be so.