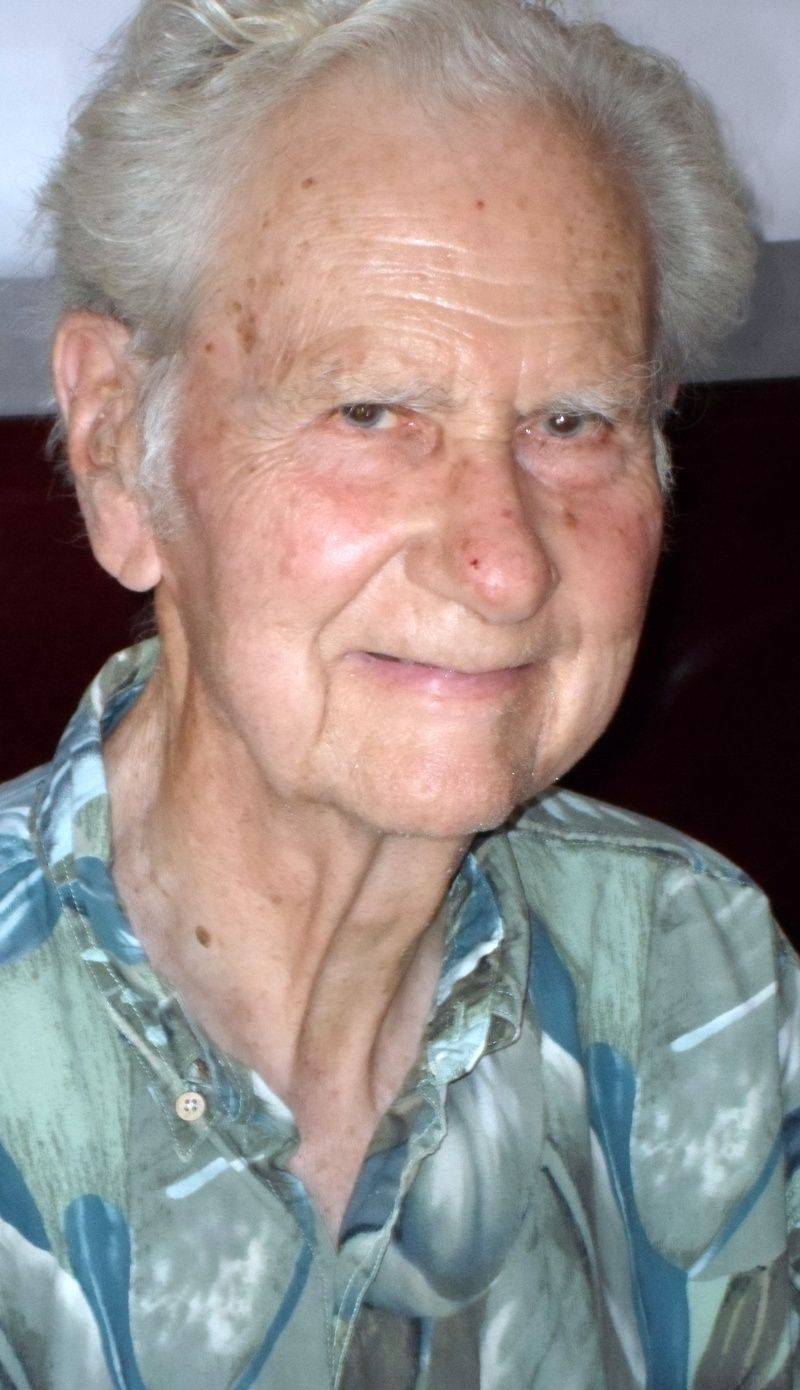 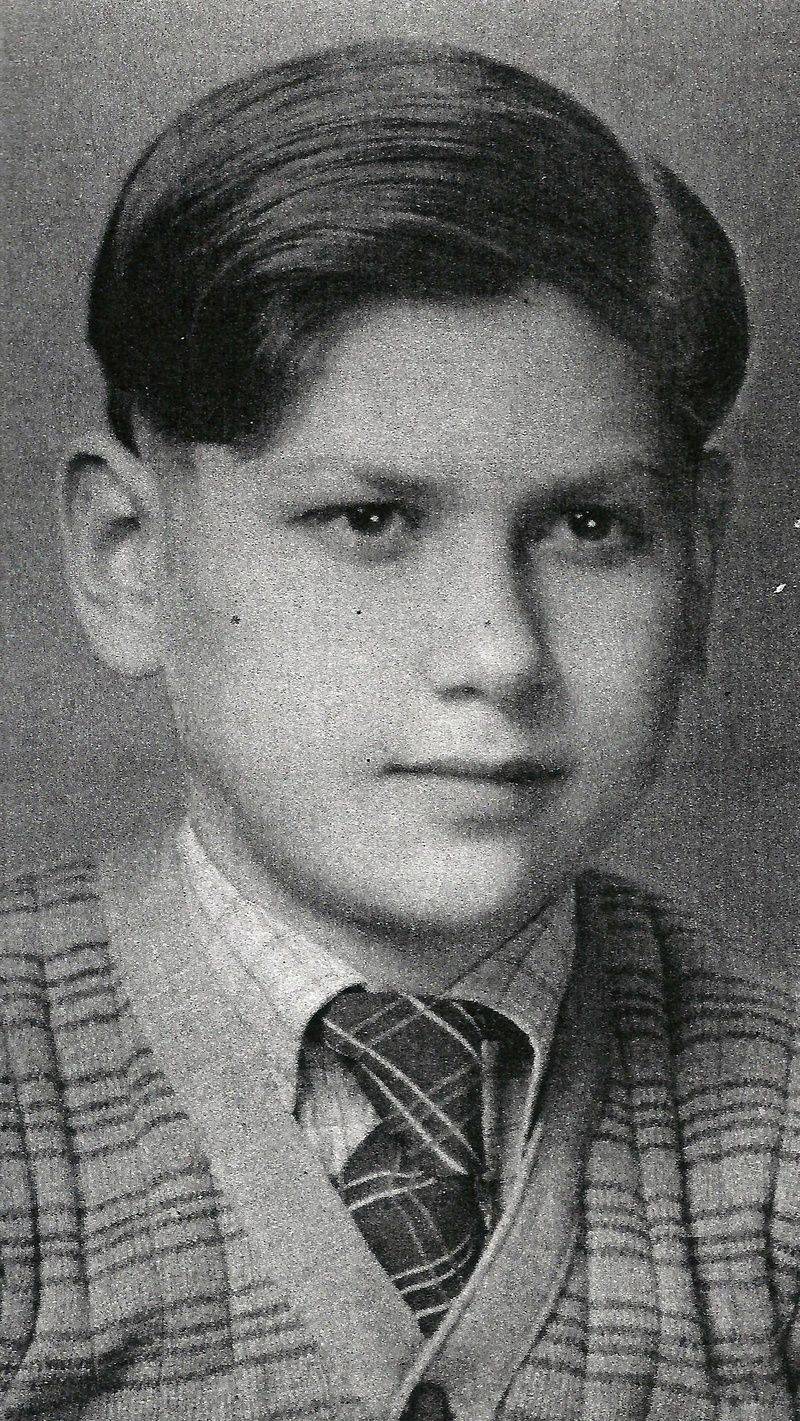 Hugo Holzmann today and as a child in Germany.

The late spring snowfall is a contrasting white to the black uniforms as two Nazi SS police approach the farmhouse outside Munich where the Jewish boy has taken refuge.

It is April 27, 1945. The war is crashing to an end, and German soldiers are deserting in droves. Their enemies are no longer the Allied armies, but the SS storm troopers prowling for deserters to hang from lamp posts. If the storm troopers could also catch the few remaining Jews, they would think it a good day.

One deserter seeks an escape by entering the farmhouse unbidden. The SS, however, are right behind him. Inside, one interrogates the soldier as the other turns his attention to the family, in the way a cruel man presses down on people.

The SS man’s eyes narrow as he turns to Hugo Holzmann, a boy of 16 sitting tensely in the corner. “Why isn’t he in the army or a labor battalion?” he demands of Rosa Brandl, the old lady of the house who was sheltering Hugo. She becomes red-faced and flustered. “He’s my nephew who was bombed out in Munich,” she lies, but not convincingly.

The boy blanches and is too scared to say anything. After spending his adolescence and teen years evading Hitler’s hatred, Hugo sees his life ending on the eve of delivery.

Just then, the second SS man interrupts and says of the soldier he is questioning, “There’s something wrong with his papers.”

Distracted away from the boy, the SS men take their terrified prisoner away, almost certainly to be executed.

One in that farmhouse would die that day, but it wouldn’t be Hugo. Reprieve.

Any crazy plan, no matter how diabolical, develops wrinkles. For Hitler, his Jew-murdering Final Solution ran into a stumbling block with the Germans who were “almost Jews.”

Hundreds of thousands were the products of Jewish-Christian unions and were ingrained in society. Many were prominent in gentile society, and some didn’t even realize they had Jewish “blood.”

Among them were Nazi party members and Wehrmacht generals. All were called mischlinge (cross-breeds), and the Nazis concocted categories of Jewishness (one-half, one-quarter, etc.) to judge them. In most cases, Hitler decided to defer judgment on them until the “victorious” end of the war. He personally ordained a few as honorary Aryans.

The idiotic tangles of those who would twist reality for evil purposes.

Young Hugo was caught in that ethnic-religious no-man’s land.

He was born in 1929 as a German, plain and simple. His mother, Anna, was raised Catholic but converted to the Judaism of her husband. His father died of sickness in 1934 and Hugo, his older sister, Herta, and their mother lived uneventfully but in poverty in Munich. They couldn’t call life good, but they could call it safe, at least for a while.

His birth made Hugo Holzmann a half-Jew, and that fact kept him alive until near the end of the war when he, too, would have been executed — “cross-breed” or not.

(Hugo’s father, Martin Holzmann, was a multi-decorated soldier from World War I, including the Iron Cross, first class. Other decorated Jewish soldiers thought medals would protect them, but their tin badges availed them naught.)

Hugo is now 85, retired from the U.S. Army and living comfortably with his wife, Isabella, in Solana Beach, within scent of the ocean. She herself is a Ukrainian Jewish survivor of World War II.

Hugo is an open man with a whimsical sense of humor. He looks back on his youth without apparent bitterness, but he’s unsparing toward the inhumanity he witnessed.

Even as a child through the ’30s, Hugo saw the tightening of the anti-Semitic vise. In 1935, he was restricted to a Jews-only school with 55 others in his class. Some students, including his sister, were lucky enough to be sent abroad to sponsoring American families. Some just stopped showing up.

He is asked what happened to all those schoolchildren.

“They were shot in the neck and dropped into a pit in Kovno, Lithuania.”

Hugo had his scrapes with bullies and discrimination, but compared to what Jews who were not “cross-breeds” experienced, he knew he was lucky. You can survive being called a “Jew dog,” even get used to it. You also grow up fast.

In April 1942, wearing a yellow Star of David patch on his jacket, he was summoned to Gestapo headquarters in Munich. When he was ushered into the official’s office, “I didn’t say ‘Heil, Hitler.’ I said, ‘Greetings to God,’ ” which was a common Munich greeting.

The officer ignored the salutation but was not unfriendly. He told Hugo he had been assigned to a job and was to report the next morning.

He would serve as a go-fer at a nursery owned by a Nazi who was also a Brownshirt SA thug named Oskar Buchner. His new boss told him he couldn’t work at the nursery wearing the yellow star, so he should take it off, which was strictly illegal. He said his Nazi boss treated him fairly but imperiously.

In his three years at the nursery, Hugo worked as a decorating assistant, which took him into some of the major churches of Munich. But his most ironic assignment was decorating Nazi headquarters in advance of a celebration.

As he placed flowers on the tables, also decorated with swastikas, he heard a rumbling voice behind him. He turned to see a short, fat man in a gaudy uniform asking if he needed help. He politely said no to Hermann Goering, Hitler’s main man.

His mother was also in a Nazi work program, cleaning a plumbing shop. The pair were given a ratty, two-room apartment with neither bathroom nor kitchen. Even so, a Jewish man was assigned to share it with them. The man, however, was soon sent to a concentration camp.

Anna was given the opportunity to renounce her Jewish conversion and return to her Catholic roots. All would be forgiven. Making a courageous decision that Hugo would always profoundly respect, Anna declined.

Hugo thinks more Germans knew about, or had a suspicion about, the Final Solution than would later admit it.

“Jews, however, had no returning witnesses. We only knew that people disappeared to the east. What happened to them we didn’t know. When they arrived at the camps, they were forced to send postcards back saying everything was well. Then, they were gassed.”

He tells of an anti-Nazi German gentile he befriended, an older man named Herr Matschilles, who warned him in 1942 that Jews were being killed, and that he should under no circumstance submit to be transported anywhere. The man also promised that, when the time came, he would hide him in the country. Hugo would remember that.

In the spring of that same year, having attained age 13, he asked for his bar mitzvah. He assumed he at least could enjoy one day without the gaze of the Gestapo.

He was disabused of that when he arrived at one of the last remaining synagogues in Munich, and there they were, checking documents in the courtyard. At least, he thought, they would then depart. But when he stood before the congregation to read from the Torah, he got an unpleasant surprise.

“I looked down and I saw the Gestapo sitting in front. That was one time I was in panic. When I sang my prayers and a portion from the Torah, my voice was shaking. My body was shaking.”

In January 1945, Anna and Hugo’s flat was destroyed in an air raid. They had nowhere to go, so he turned to Herr. This German friend proved faithful to his word and arranged for Hugo to go to the farmhouse in the countryside and for his mother to stay a few miles away.

That required Hugo to abandon his nursery job, which made him a fugitive. Also, in February, the Nazis removed all protections from the mischlinge. As Germany was collapsing, the Nazis seemed as determined to finish off the remaining Jews as to fight the Allies.

Persecution, like pain, has a life span, long though it may often seem to be. And two days after Hugo’s narrow escape, on April 29, he was brushing his teeth when Frau Brandl rushed out of the house screaming: Amerikanische panzer! American tanks!

Hugo looked out the window at the road where two days earlier an SS vehicle had stood and saw a tank with a big white star on its side. Those SS hunters were now the hunted.

And he would live.

Hugo and Anna emigrated to Philadelphia to join Herta in 1947. Anna died in 1982 at age 86. Hugo joined the Army, became a sergeant and served for 20 years, including in Korea and Vietnam. After he retired from the service, he worked for the University of Colorado in a supervisory capacity.

Today, Hugo stays engaged documenting and gathering photos of his childhood. He is a good writer and writes fiction with plots in which Islamic terrorists become psychological bedfellows of Nazis. He also remembers his classmates’ names. In solemn moments, I’m sure he can also see their faces.

The only Star of David Hugo now wears is in his heart.