FIGHTING HARD FOR LIFE, FOR HERSELF AND HER 3 CHILDREN 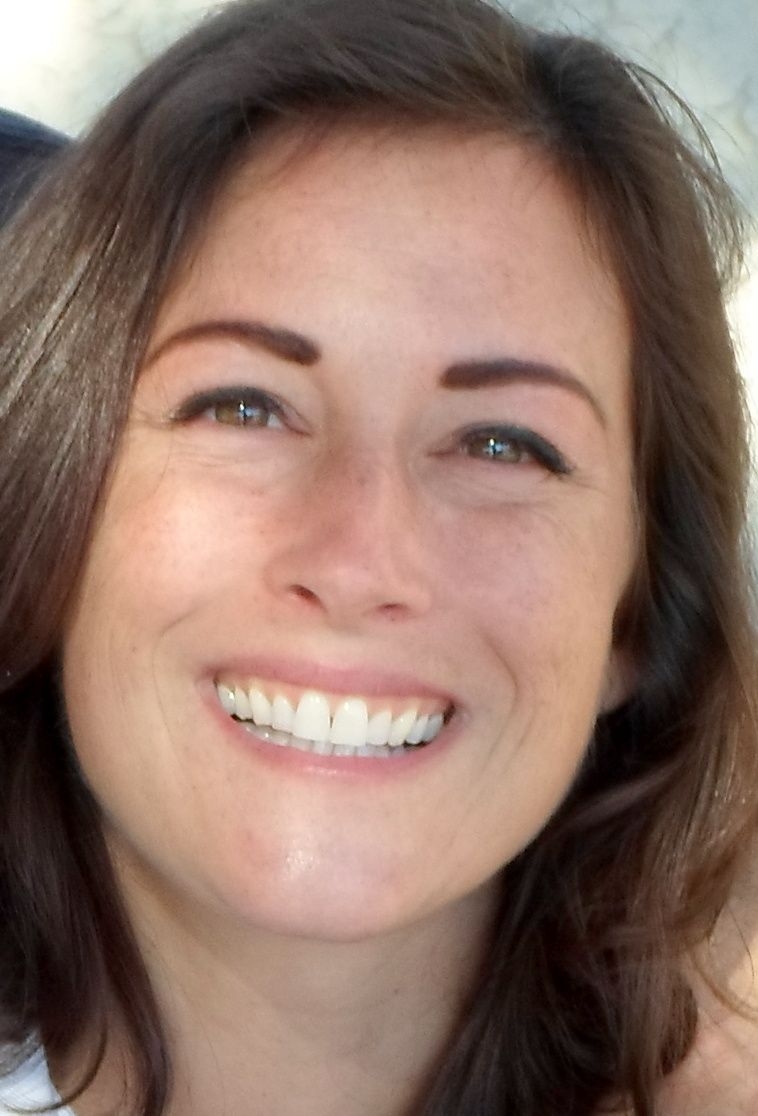 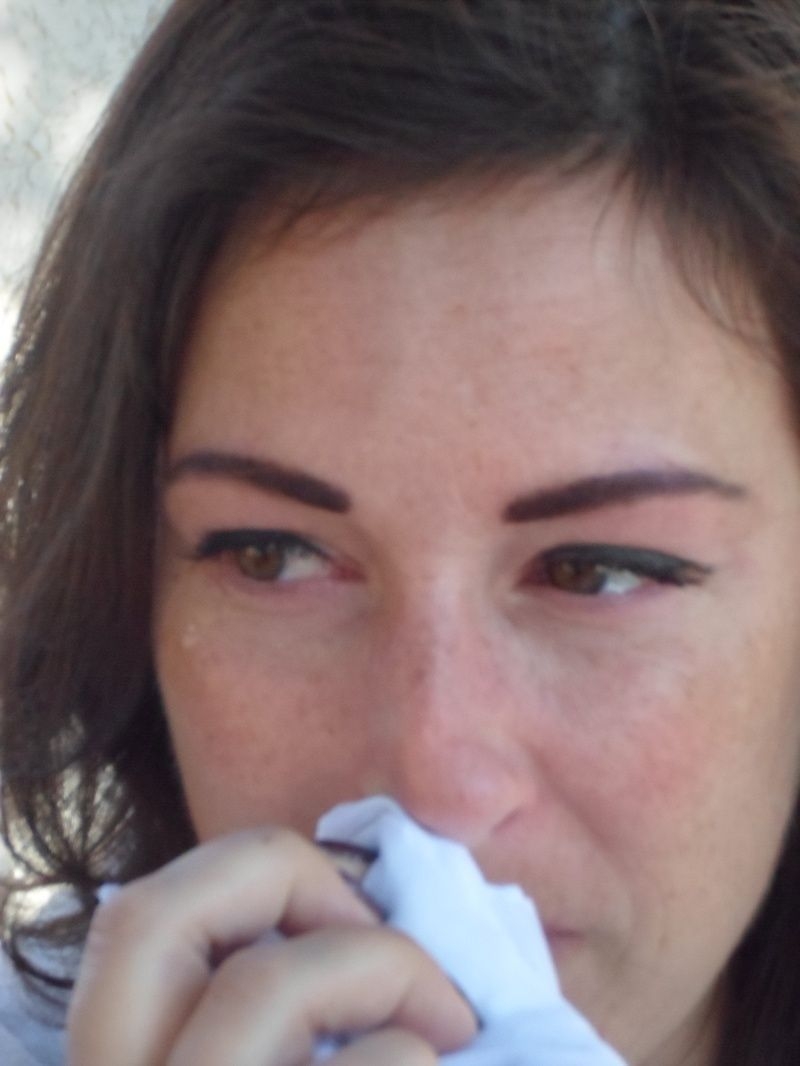 It's a lovely day, and I'm sitting on a sunny patio across from a pleasant lady with a beautiful smile and a voice that purrs like a jeweler selling a diamond.

I wish I could leave it at that.

Christie Hess is 35 with a happy marriage; a 5-year-old stepdaughter, Alana; a daughter of 13 months, Vivian; and another girl due in a month. Three daughters and a husband willing to do the dishes.

Christie has Stage 4 breast cancer. It's aggressive and has metastasized into her liver, sternum, clavicle, spine, ribs and lungs.

That's not all. Christie had to quit her job, obviously. But John Ennis, her husband, is also unemployed without benefits. They pay $594 per month for COBRA health insurance and watch their savings diminish, one skinny dollar at a time.

They live in a small apartment, swallowed up in a huge Tierrasanta complex. For Christmas, they want to go into the backcountry and cut their own small pine at a tree ranch. Beyond that ... Christmas for children costs money. That's reality.

John is an educated, experienced professional. Having no job wasn't supposed to happen. But neither was the cancer.

Christie grew up in Philadelphia, earned a degree in business and developed a career in hospitality management. She liked to make strangers smile, so that was a satisfying career.

She spent years in the Caribbean, Europe and Asia working at resorts, then arrived in San Diego seven years ago. Here, she mainly worked at the Hyatt Regency Mission Bay, where she met John.

John, 41, is a business graduate of the University of San Diego. He made his career in restaurant management.

He and Christie will have been married for three years on Dec. 23.

They had six months of newlywed happy time, but then came June 2013. It was no longer springtime.

Christie was diagnosed with breast cancer. She underwent months of chemotherapy and finished with a single mastectomy. Doctors believed she was cancer-free, with maybe a couple of small question marks.

Months later, the answers to those questions weren't all good, and she had a lumpectomy in summer 2014. She was then considered cancer-free for 15 months.

While all of this was happening, doctors said it would be highly unlikely, almost impossible, that she could ever become pregnant because of the chemicals that had coursed through her body.

But you know what always happens to those predictions.

Her surprise daughter, Vivian, was conceived in March 2014 and born in October of that year. And again, in defiance of those same probabilities, Christie also became pregnant in May of this year.

Meantime, Christie had decided to change careers and become a nurse. She realized it would satisfy her nurturing urges more than the hotel business.

"After having experienced both ends of the spectrum, from oncology to labor and delivery, [nursing] fit my desire to have a greater impact in helping people."

She smiles wanly. "That was the plan. But now, it's not much of a plan."

The plan fell apart after a physiology class session in which the teacher described how heart-attack symptoms differ in women.

Listening, Christie thought: "Hmmm, I've been having pains in my back and in my chest. I should have my heart checked."

She describes the pain. "I had this really weird back spasm. I had never experienced anything like it. I was like, ‘Ah, that's pretty weird.'"

She went to the emergency room and had an electrocardiogram (EKG) and other tests. Her heart was fine. However, a doctor also had her undergo a CT scan. And - you know by now what they found - there were two cancerous masses in her chest.

Christie was stunned. "I remember saying to myself over and over: ‘This isn't real. Not possible. It can't be. I went to the gym yesterday. I'm pregnant. I'm cancer-free.'"

She was compelled to quit her job at the U.S. Grant Hotel immediately and start an aggressive round of chemotherapy. First, she was reassured that it would not affect the fetus she carried.

"The (cancer) molecules are supposed to be too large to pass into the placenta, so the fetus stays safe in its little sack."

The baby - Maxine-to-be - is fine. She's expected to be born in mid-January.

"I just really like the name Maxine, and with a sister named Vivian, they'll have two older, elegant names that can be shortened to be cool when they're young, like Max and Viv, so they won't hate me forever." She laughs, thinking of the self-consciousness of young girls.

The doctors moved quickly, and Christie is back on chemotherapy with a drug named 5-FU.

Given the ordeal of chemotherapy, compounded by pregnancy, I ask if she ever considered abortion.

"No. It's the most magnificent accomplishment ever to bring little lives into this world and not kill them (but) to feed them, and clothe them, and love them, and help them grow into awesome little people, to become awesome big people and great members of society."

When they moved back to San Diego last summer after a short stay in Arizona, the decision was made that John would take care of the home and girls while he looked for a job equal to his qualifications. That would free Christie to hold down her job at the U.S. Grant Hotel and go to school for nursing.

That's how it's often done these days, and it was a workable plan. But when Christie got her most recent cancer diagnosis, John immediately found restaurant work as a server and wine steward. He was overqualified, but it was a job.

Then again, so much for plans. When Christie was going through a bad time with the chemo, he asked for a few days off and was told his job would be waiting when he returned.

Now, John looks for another job - any job, hopefully with benefits - and fearfully watches the checking account.

How is John reacting to all of this?

"He's doing as well as he can. I mean, he hasn't had a formal breakdown, although I'm sure it eventually will come," Christie says.

A sick wife and no job. Any man knows how John feels - guilty, helpless and other self-punishing emotions.

Christie says of her spouse, "He's a very good husband. Sometimes he watches too much football on Sunday for my liking, but if that's my big complaint, I guess I have it pretty fantastic. He's a great parent. He brushes their hair and talks to Alana about boys at school. So I feel like I'm leaving a good partner behind. But I do feel guilty."

"About leaving, whenever that is."

A tough question: Do you think about another mother, another woman raising the kids?

"I do. I told John, ‘She'd better be exquisite.' I was like, ‘She better be eloquent and intelligent and kind and beautiful and loving.' I also know that I am leaving a very solid base for them with my own family."

How has this ordeal changed you?

"Well, I'm trying to make peace with leaving this life. My attitude used to be more self-serving. There is definitely a shift in focus to being kinder and letting the little things go, because there's now something greater for that energy to be spent on. It's important to stay long enough to help the girls understand the value of being the best, kindest human being you can be."

Her eyes redden, and she dabs at them with an offered handkerchief.

"I'm writing letters to the girls for different times in their lives when I might not be there - their first day of school, the first time they feel defeated by life, their first date or prom, their wedding day and then maybe just sometime, like, ‘Read this letter if you miss me.'"

How long might Christie have if the cancer is not overcome? Maybe a couple of years. Maybe a few months. Maybe ... who knows?

Cancer has a sick sense of humor. It comes, then goes away, then takes its own sweet time dodging from hiding place to hiding place, then one day, "Boo! I'm back."

Christie can't always keep the darkness from creeping in. "When, finally, it's time, I won't go out looking healthy with rosy cheeks. It'll have consumed me in some way, whether organ failure or it's moved to my brain or something. I'll be a very sick, sick woman, probably on hospice. These are the honest conversations we've had with the doctors."

The ordeal never lifts its foot off of Christie. "My body is filled with poison. I can feel it in my bones, my insides. I keep a journal, talk a lot with John and my friends. I'm not depressed, just sad.

"I just need a little rainbow. Just a little one."

What a strange, strange role we are given to perform on this stage. Christie is witnessing the struggle within her own body: one part trying to stave off death, another part trying to create life.

Christie's mind floods with longing as she stands in the apartment doorway and absorbs the moment: her husband glued to the Chargers game on TV, her infant on the floor cooing, the unborn inside her becoming ever more restless, the homey smell of cooking coming from the stove.

In all her 35 years, nothing Christie has done can equal her motherly grace as she puts the children to bed, shoves financial worries aside and then sits down in the quiet of night to write love letters to her children, puts them into envelopes, licks the flaps and then writes on the front: "Vivian - high school graduation."

Oh, dear God, no one who has ever drawn breath has wanted anything more than this gentle woman wants not to leave.

Stay here, Christie, for that brave smile and the steadfast soul that gives it bloom.

Fred Dickey's home page is freddickey.net. He believes every life is an adventure and welcomes ideas at [email protected]